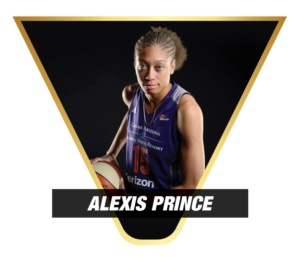 Alexis Prince is a guard for the Phoenix Mercury. She played college basketball at Baylor.

One-year WNBA player out of Baylor

Has appeared in 18 games and holds career averages of 1.9 points and 1.9 rebounds in 7.2 minutes per game

Posted her best all around game on August 24, 2017 against Los Angeles, finishing with a career-high nine points, three rebounds and two assists in just over 17 minutes of action

Appeared in 18 games with the Mercury this season

Scored a season-high nine points on August 24 against Los Angeles…shot 66.7-percent (four-of-six) in the game

Ended the season with averages of 1.9 points and 1.0 rebound in 7.2 minutes per game

Averaged 8.1 point and 4.0 rebounds in 136 career games during her four years at Baylor

Recorded best year during senior season, finishing with career highs in scoring (12.1 ppg) and rebounding (5.8 rpg)…also knocked down 62 three-pointers, converting on 41.6-percent of her attempts

Named to the Big 12 Championship All-Tournament team in 2015

Born on February 5, 1994 in Jacksonville, Florida

Has two sisters, Kristin and Zariah

Enjoys listening to music and hanging out with her cousins