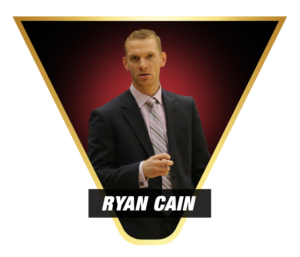 Cain was hired as the Keene State Owls Men’s head basketball coach in May 2016, after serving one year as interim head coach.
After six years on the Owls' bench, Cain boasts a record of 97-57 (.630), and has won at least 19 games in four season of five seasons the helm of the Owls. KSC only played nine games in the abbreviated season, but nonetheless reached the Little East tournament championship game for the sixth time in past seven seasons.  In 2021-22, under Cain's watch, the Owls defeated UMass Dartmouth in overtime 71-69 to win the Little East Conference Championship Tournament. KSC would reach the NCAA tournament for the fourth time in Cain's six seasons, advancing to the second round. During his tenure, Cain has also helped the Owls make it to the Elite Eight in 2017 and the Sweet 16 in 2016.  The Owls shared the Little East regular season title in 2018-2019 and captured the No. 1 seed for the conference tournament, where KSC beat Western Connecticut 107-80 and Eastern Connecticut 72-69 to win the program's fourth LEC tournament title. It was Cain's second in four years on the KSC bench.

Cain has established the Owls into a perennial feature on the national stage. In 2016-2017, the Owls defeated Amherst College, No. 5 Ramapo College, and No. 2 Christopher Newport to reach the Elite 8 before bowing out to eventual national champion Babson College.

Keene State finished 22-10 and 10-4 within the LEC, gaining the No. 2 seed in the conference tournament and receiving an at-large bid to the NCAA tournament.  The Owls finished with a No. 11 ranking in the final national poll of the season, the highest in program history.

During the 2015-2016 season, he led the Owls to a 20-11 record and an 8-6 mark in the LEC, as well as the No. 3 seed in the Little East Conference tournament. Working through several injuries this year, Cain and the Owls won their second consecutive Little East Conference tournament championship, and reached the round of 16 in the NCAA tournament for the first time in nine years. Keene State finished with a national ranking of No. 22 in the final d3hoops.com poll that season.

Under his watch, several Owls have received LEC All-Conference honors, including Matt Ozzella, Ty Nichols, Nate Howard, and Nate Stitchell.   Nichols became the school's all-time leading scorer in January of 2019 and was later named the program's fourth All-American, by both d3hoops and the NABC, and the d3hoops.com Northeast Region Player of the Year. Additionally, Howard signed a professional contract to play in Canada.

Cain came to Keene from Worcester Polytechnic Institute, where he spent 12 years as both a player and a coach.  One of the greatest players in WPI history, Cain is the Engineers’ all-time leading scorer and led the Engineers to four New England Women’s and Men’s Athletic Conference (NEWMAC) regular season championships and a pair of NEWMAC tournament titles. The Engineers reached the NCAA tournament in Cain’s final three years as a player (2005-07), including the Sweet 16 in 2005.

A three time NEWMAC All-Conference selection, Cain was the league’s Player of the Year in 2005 and 2007, and was named the Jostens Award winner in 2007 as the top student-athlete in NCAA Division III men’s basketball.

After the conclusion of his playing career, Cain moved to the Engineers’ bench, serving as an assistant coach to Chris Bartley, and continuing WPI’s success with NCAA tournament appearances in 2008, 2009, 2011, 2013, 2014, and 2015.  Cain helped WPI to five NEWMAC regular season championships, one tournament title, and developed Antoine Coleman (2008) and Jeffrey Robinson (2011) as NEWMAC Players of the Year.