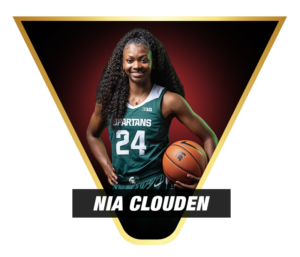 Nia Clouden’s offensive arsenal is unlimited.  Her ability to create space and take over games offensively is similar to Kyrie Irving.  She is well adept in iso scoring, screen and roll scoring and coming off screens.  Nia rebounds like a small forward and she has point guard instincts.  Defensively, she can guard positions 1 and 2 and is extremely quick laterally.

First round WNBA draft pick of the Connecticut Sun (#12 overall)

Had a 50 point game against FGCU