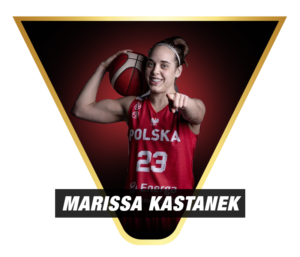 Marissa Kastenek is a natural born leader and a knock-down shooter. This Euroleague veteran is well adept at either guard spot due to her ability to create off the dribble, create in the pick and roll and make shots from anywhere on the floor. A three level scorer, she has a plethora of different finishes in the lane with either hand, can knock the mid-range and loves to shoot the three. Defensively, she can guard either guard spot and will press full court. She is a winner.

Named a Freshman All-American by Full Court Press and was the ACC Freshman of the Year after averaging 10.9 points and 3.6 rebounds per game ... One of only two players to be named ACC Rookie of the Week three times during season ... Led all freshmen in ACC regular-season games with 11.2 points per game ... Ranked 25th in the ACC in scoring - second among all ACC freshmen ... Scored a season-high 22 points in the win over TCU (12/6) and had a game-high 21 points against UCLA (3/21) in the NCAA Tournament ... Also scored 20 points in a win over Florida Atlantic (11/17) and had 19 points in wins over Maryland (1/7) and Va. Tech (2/7) ...Scored in double figures 18 times ... Ranked 5th in the ACC in 3-FG's made (1.9) and 9th in 3-FG% (35.7) ... Her 369 points was the most by an NC State freshman since Tynesha Lewis had 376 in 1997-98 ... Finished with a team-high 65 three-pointers, one shy from tying Jennifer Howard's Wolfpack freshman record ... Her offensive rebound put-back was the game winner over Miami (2/14) ... Named to the ACC All-Tournament second team after averaged 9.8 points, 4.0 rebounds and 1.5 steals per game ... Shot 40.0 percent (8-of-20) from three-point range and 90.0 percent (9-of-10) from the free throw line ... Named to the ACC Academic Honor Roll.  High School: Played four years of high school basketball - first two seasons at Crete High School and final two seasons at Lincoln Southeast High School for coach John Larson ... Averaged 17.5 points, 5.4 rebounds, 4.1 steals and 3.3 assists ... Scored 1,544 points ... Made 143 three-pointers ... Led her teams to a 97-6 record in four seasons, including three-straight 26-1 records her final three years ... Was nominated for the McDonald's All-America team ... Heading into her senior season she was a pre-season honorable mention All-American by Sporting News and the 42nd-ranked guard nationally by ESPN Hoop Gurlz ... Was tabbed All-Super-State as a junior after averaging 18 points, seven rebounds and four steals ... Led Lincoln Southeast to a state championship by scoring 23 points in the title game over Millard West ... Also led her clubs to the state title games as a sophomore (Crete HS) and as a senior ... Named all-state three times and all-conference on four occasions ... In addition to her success on the basketball court, Kastanek was the state champion in the 800-meter event as a sophomore ... Member of the National Honor Society and had a GPA in the top 10-percent of her graduating class of 500.  Personal: Marissa Lee Kastanek ... Has an older sister, Allie, a younger sister, Alexa, who will play basketball at Iowa beginning in the 2013-14 season, and a younger brother, Marcus ... Volunteered at local elementary school at NC State as part of Camp Pack ... Majoring in psychology, while also earning minors in coaching, Spanish and sports science ... Graduated with a 4.0 GPA ... Member of Phi Kappa Phi, Phi Beta Kappa, Gamma Beta Phi and Psi Chi.