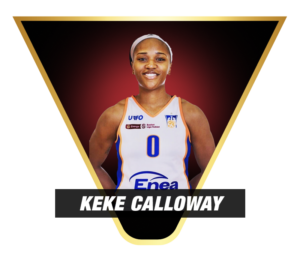 Keke is a fantastic combo guard with an elite ability to shoot consistently shoots over 38% from the three point line.  She stretches the defense with her ability to make shots from anywhere. As a lead guard, she is great in the pick and roll. She has very quick and active hands defensively, leading to multiple steals per game on average.