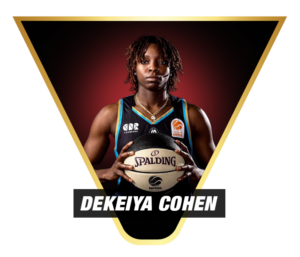 Dekeiya is an ATHLETE! Very strong, physical, but very smart player. She makes the players around her better by doing the dirty work, but can knock down the mid-range jumper, shoot the three, and finish in the lane amongst traffic. Defensively, she can guard positions 2-4 equally well. What makes her extra special is that coaches don’t have to call plays for her in order for her to be effective.

Was an all-state basketball and volleyball standout at Charleston's (S.C.) West Ashley High School... Tore right ACL during her senior season of basketball, but still earned district Player of the Year honors... South Carolina Player of the Year as a junior... Averaged 23.3 points, 11.7 rebounds, 4.9 steals and 2.0 blocks per game for freshman, sophomore, junior and senior years, also played on varsity as an eighth grader... Won a regional business plan competition for her project, The Catching Prodigy, as part of an entrepreneurship program, advanced to the semifinals of the National Youth Entrepreneurship Challenge... Maintained a GPA above 3.0 throughout high school.
PERSONAL... Daughter of Keith and Deborah Cohen... Has two older brothers, Tye and KJ... Chose Baylor because of the "great women's basketball program and the excellent academics"... Selected Baylor over South Carolina, Louisville, Miami, and Georgia Tech... Hobbies include shopping, acoustic guitar and playing with her dog... Communication studies major... Planning on playing in the WNBA, helping run a Fortune 500 company and starting her own business.