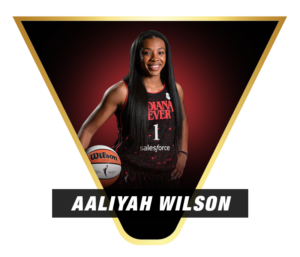 Drafted number 11 overall in the first round of the 2021 WNBA draft, Aaliyah Wilson is a versatile two-way player that can play with the ball in her hands or off the ball. Aaliyah’s great elevation on her jump shot allow her to score over taller players with ease. She is a high level 3 point shooter, averaging 42% from 3 point range at Texas A&M. Aaliyah is a winner and makes winning offensive and defensive plays, evident by her almost 2 steals per game on an SEC conference regular season championship team.

Earned the start all 25 games so far this season… Earned the first All-SEC recognition of her career, receiving All-SEC Second Team honors as a graduate following a team-leading 18 double-digit scoring performances this season… Named Co-SEC Player of the Week for the week of Jan. 5-12 after wins over then-No. 10 Kentucky and then-No. 13 Arkansas… Leads Texas A&M in scoring this season, averaging 13.3 points while contributing 5.6 rebounds ad 2.6 assists per game… Serves as the team’s most prolific perimeter defender, averaging 1.7 steals and 0.9 blocks per contest to lead all Aggies… Hauled in a career high 10 rebounds in the second game against Lamar, also scoring 14 points (Dec. 2)… Led the way in scoring against Texas with 17 points to go along with eight rebounds (Dec. 6)… Led the team with 13 points, also adding a career high six steals against Little Rock (Dec. 10)… Commanded the defense with four steals and three blocks in the win over Abilene Christian, also leading the team with 15 points (Dec. 13)… Set a new career high scoring mark in the Aggies’ win over Arkansas on Jan. 10, finishing with 27 points on 10-of-19 shooting… Tied a then-career high in rebounds set earlier in the season, snagging 10 boards in the road win at Missouri (Jan. 24)… Finished the regular season on a seven-game double digit scoring streak highlighted by a 17-point outing against No. 5 South Carolina (Feb. 28)… Opened the SEC Tournament with a dominant performance on the glass against No. 8 seed LSU, snagging 15 rebounds against the Lady Tigers (Mar. 5).   2019-20

Played in all 30 games and started in nine... Returned from an ACL injury that ended her season last year... Scored nine points against Duke (Nov. 10)... Scored seven points with two rebounds against Prairie View (Nov. 27)... Amassed 13 points and five rebounds vs. Central Arkansas (Dec. 4)... Collected eight rebounds along with 10 points against Georgia Tech (Dec. 20)… Made her first start of the season at Kentucky (Jan. 16)… Had a career high four steals against Missouri (Jan. 26)… Blocked a career-high four shots against Georgia (Jan. 30)… Scored a season-high 16 points against LSU (Feb. 2)… Played a season-high 40 minutes while putting up 12 points against Mississippi State (Feb. 9)… Scored 10 points against Vanderbilt (Feb. 13)… Tallied 12 points against Auburn (Feb. 23) while going 2-for-3 from behind the arc… Made her first start in five games against South Carolina (Mar. 1), scoring double-digit points for the third game in a row.  2018-19

Started the first nine games, but then missed the remainder of the season due to injury… Averaged 13.8 points, which ranked 21st in the SEC at the time of her injury, and 4.1 rebounds per game… Scored 15+ points in five of her nine games, including a season-high 20-point game at Little Rock… Had at least nine points in her first eight games at Texas A&M… Prior to her injury, also ranked among the conference’s leaders in assist-turnover ratio (13th), blocks (11th) and steals (10th)… Had 18 points twice, against Rice in the season-opener (Nov. 7) and at Houston (Dec. 6)… Was the first woman to score a basket in Houston's newly-renovated Fertitta Center… Had six assists against Jacksonville (Nov. 11)… Grabbed nine rebounds against Lamar (Nov. 29)  2017-18

Attended Texas A&M and practiced with the women's basketball team, but sat out the season due to NCAA transfer rules.  2016-17