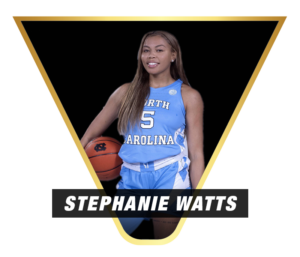 Stephanie Watts is an elite level athlete. With a 6’4” wingspan, she is an imposing figure on the court. Her speed and three-point prowess make her on the best players in the country in transition. Stephanie can create her own shot off the bounce or run off screens. Defensively, she led her college team in blocks and steals and can guard positions 1-3 at a high level.

2nd all-time in UNC program 3 pointers made with 275

26 games with at least 4 three pointers made

Scored over 1,500 points in college career

Graduate Student Season at UNC in 2020-21 Transferred back to UNC for her graduate season after spending one year at Southern California ... Versatile player who ranked in the ACC’s top 25 in assist/turnover ratio (5th), steals (5th), blocks (22nd) and assists (17th) in conference play ... One of just two conference players ranked in the top 25 in each of those categories ... Led UNC in assists, steals and blocks ... Scored  in double figures in 12 of the season’s final 13 games, averaging a team-best 16.2 points over that span ... Averaged a team-best 15.1 points per game in the team’s eight ACC wins ... Fell one assist shy of the program’s first triple-double with 25 points,12 rebounds and a career-high nine assists in the homecourt  win over Notre Dame on Jan. 24 ... Scored a season-high 29 points, including 7-for-11 shooting from three-point range, in the NCAA Tournament first round game against Alabama, playing all 40 minutes ... Scored a then-season-high 26 points and added five rebounds, four assists and four steals in the win at Clemson  USC in 2019-20 Played in four games in November before her season was ended by injury ... Season high was 14 points against Virginia ... Started against the Cavaliers on 11/9/19 and also in the following game vs. UC Riverside ... Was granted an additional year of eligibility, which she used with UNC in 2020-21

Started all 27 games in which she appeared ... Averaged 15.2 points, 5.5 rebounds and 3.1 assist per game while hitting a team-high 82 three-pointers, fifth in program history... Hit nine three-pointers against UNC and finished that game with a season-high 35 points ... Scored in double digits in 21 games and passed 20 five times ... Named to the Paradise Jam All-Tournament Team after averaging a team-best 21.7 points as UNC went 2-1 in the event ... Scored 27 in the championship game against Kentucky to top 1,000 points for her career ... Finished the season with a total of 1,320  JUNIOR SEASON 2017-18 Sidelined by injury and did not compete

Scored a career-high 39 points that evening against the Lady Bucs, the fifth most points ever scored in a game by a Tar Heel player

Named ACC Player of the Week on Nov. 28 after her record setting performance against CSU

Had 28 points and 11 rebounds against Alabama A&M

Went for 25 points against Wake Forest

Missed the final five games due to injury.   FRESHMAN SEASON 2015-16 2016 ACC Freshman of the Year

Named to the  ACC Newcomer Watch List in the preseason

Set a UNC freshman record with 76 made three-pointers

Ranked 13th in the NCAA in three-pointers attempted (260)

Scored in double figures on 25 occasions, including six games with 20 or more points

Had six blocks against USC Upstate

Made a three-pointer at the buzzer to lift UNC over Maine.

Ranked No. 14 by All Star Girls Report and 24th by ESPN in her class

Scored 19 points in the McDonald’s game

Set North Carolina high school single-season record with 156 three-pointers as a senior, and finished career with 374 made three-pointers, second most in state history

Set a Union County record as a sophomore by scoring 50 points against Cuthbertson on Nov. 30, 2012