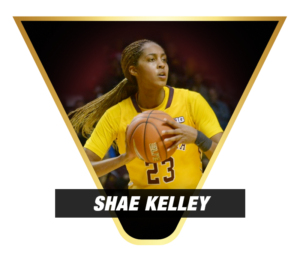 Shae Kelley is a physical, yet very skilled 4/5.  She can stretch the defense out to the 3 point line or dominate them in the paint.  She can start the fast break and finish the break.  She battles with bigger players all the time and is a matchup nightmare.  Defensively, she can guard positions 2-5 and uses her great athleticism to stay in front of players.

2014-15 Â· Senior Season: In her first season of play for the Gophers, she was named to the All-Big Ten First Team by media and All-Big Ten Second Team by coaches.· listed among the nation's top under-the-radar stars by espnW. earned Big Ten weekly honors five times during the season, which included three player of the week accolades Â· led the team in steals, field goal attempts and free throw attempts Â· ranked second on the team in points, scoring average, field goal percentage, field goals, free throws, rebounds, rebounding average, offensive rebounds, defensive rebounds, blocks and minutes played Â· overall, ranked sixth in the Big Ten in scoring, offensive rebounds and double-doubles, seventh in rebounds and defensive rebounds and 15th in steals Â· in league only games, ranked fifth in scoring (17.8) and seventh in rebounding (9.7), offensive rebounds (3.3) and defensive rebounds (6.4) Â· scored 10 or more points in 28 of the Gophers' 33 games played Â· had 10+ rebounds in 15 games for the Gophers Â· scored 20 or more points in 14 contests and 30 or more points in 1 game Â· tied for sixth in the Big Ten with 14 double-doubles on the season Â· averaged 14.0 points, 9.3 rebounds and 1.8 assists per game against ranked opponents Â· Gophers finished the year 11-3 overall when Kelley led the team in scoring Â· averaged 24.5 points, 10.5 rebounds and 2.5 steals per game at the 2015 B1G Tournament Â· her 26 points vs. Purdue were the most by a Gopher in a B1G Tournament game since Jamie Broback's 28 in 2005.

Prior to Minnesota: Named to the 2014 All-Conference USA First Team as a member of the Old Dominion women's basketball team Â· surpassed 1,000 career points in just her second year at ODU, becoming just the fifth Lady Monarch to do so Â· averaged 17.8 points and 9.7 rebounds per game Â· led the team in total points (605), rebounds (331), field goals made (225), free throws (151), blocked shots (42), steals (61), starts (34) and minutes per game (33.6) Â· ranked No. 17 nationally with 17 double-doubles Â· scored a career-high 32 points versus ECU Â· named to the 2014 VaSID All-State First Team Â· as a junior, her 6.9 defensive rebounds per game ranked third in C-USA standings, while her 1.8 steals and 1.2 blocks per game ranked 10th and 12th, respectively Â· named MVP of the Basketball Hall of Fame Tournament Â· garnered C-USA Player of the Week honors for the first time in program history on Dec. 9 Â· was the only underclassman named to the All-Colonial Athletic Association Second Team as a sophomore Â· earned a spot on the CAA All-Defensive Team Â· ranked in the top-10 in the league in points, rebounds, blocks, steals and field goal percentage Â· led the team with 13.5 points and 8.5 rebounds per game, while she paced the squad with a .497 field goal percentage, 73 steals and 36 blocked shots Â· played one season at Northwest Florida State Â· earned Junior College All-America honors after averaging 13.7 points and 7.6 rebounds per game Â· finished the season ranked as the No. 9 overall junior college player and No. 3 at her position Â· named the Panhandle Conference Freshman of the Year and garnered First Team All-Panhandle Conference accolades Â· named Ms. Colorado Basketball by the Denver Post and led Denver East High School to the school's first state championship as a senior.