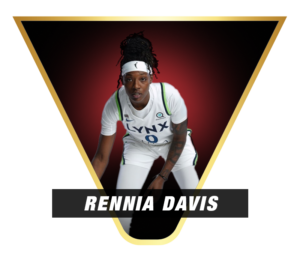 Rennia Davis is the definition of all around player. She can score via creating off the dribble, catching and shooting, pick and rolling, pick and popping, or creating in the pick and roll as the ball handler. Defensively she can guard 1-4 and her long arms make her an elite defender. She can finish against size and hits big shots in big games.

2018-19 - SOPHOMORE
• Led UT in scoring (14.9), rebounding (7.7) and free throw percentage (.856) in her second season on Rocky Top.
• Ranked No. 1 in the SEC in free throw percentage, No. 8 in rebounding and No. 12 in scoring.
• Scoring average tied for No. 5 all-time by a UT sophomore, while her rebound average is the ninth-best for a second-year performer at Tennessee.
• Had the seventh-most double-doubles ever by a UT sophomore (9) and her 18 as a Lady Vol put her at No. 20 on the career list.
• Her sophomore double-double total (9) is the sixth-most by an active player in the SEC and second-most by an underclassman.
• Led Tennessee in scoring on nine occasions and was UT’s leading rebounder in 15 contests during the 2018-19 season.
• Scored in double figures a team-leading 26 times, with 16 games of 15+ points and six of 20 or more.
• Had 10 games with 10 or more rebounds.
• Hit 29 of 34 free throws inside the final four minutes of games.
• Paced UT in scoring with a season-high 29 points at Mississippi State while pulling down six boards.
• Tallied 23 points and 14 rebounds in UT’s SEC-opening win at Auburn.
• Led UT in scoring against UCLA in the first round of the NCAA Tournament with 21 points and 10 rebounds.
• Recorded a double-double against Stanford with 14 points, 10 rebounds and a pair of steals.
• Scored 19 points while dishing out three assists against LSU in the SEC Tournament.
• Named SEC Player of the Week after posting double-doubles against Auburn (15 pts./10 rebs.) and Mizzou (16 pts./11 rebs.).
• Chosen College Sports Madness SEC Player of the Week after logging double-doubles against Florida (19 pts./10 rebs.) and Vanderbilt (17 pts./12 rebs.).
• Selected MVP of the Junkanoo Jam after averaging 15.5 points, 5.5 rebounds, 2.5 assists and 2.0 steals during the tournament.
• Produced 24 points and seven rebounds in a crucial home victory over LSU.
• Tallied 16 points, two assists and a team-high eight rebounds against Mississippi State in the quarterfinals of the SEC Tournament.
• Knocked down three treys in the fourth quarter, leading UT scoring with 18 points in its come-from-behind win over UAB.
• Named to SEC Preseason All-SEC First Team by coaches and media.
• Advanced to Cheryl Miller Award Top 10.
• Also named to Women's Citizen Naismith Trophy and John R. Wooden Preseason Watch Lists.

PERSONAL
• Full name is Rennia Tyi Davis.
• Nickname is “Re.”
• First and middle names are pronounced reh-NYE-uh TIE
• Born on Feb. 24, 1999, in Jacksonville, Fla.
• Mother is Sheretta Davis.
• Has two siblings, Rodnetta Chandler and Shavonna Davis.
• Taking advantage of the Early College Program at Ribault, Rennia earned an Associate of Arts degree from Florida State College while she was in high school.
• Enjoys cooking and playing pool.
• Would like to own a restaurant someday.
• Graduated from UT in May 2020 with a degree in hotel, restaurant and tourism management with a minor in business administration.
• Spent 2020-21 season working toward a master's in agricultural leadership, education and communications.
• Recipient of the Bernard Kaplan Scholarship Endowment and the Lloyd Lawson Thornton Winners' Circle Scholarship For Forward.
• Follow @Legend_Hooper on Twitter and @Legend.Hooper on Instagram.