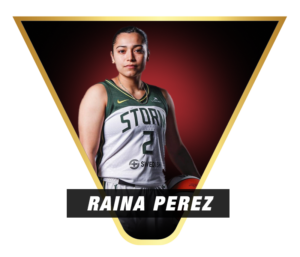 Raina Perez is a WINNER. She is a prototypical point guard and a phenomenal leader that is very physical offensively and defensively. Raina is a knock-down shooter off the catch and off the bounce. On defense, she crowds offensive players, making them very uncomfortable, while her quick hands create steals.

PRIOR TO NORTHERN ARIZONA: